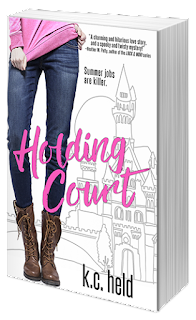 Sixteen-year-old Jules Verity knows exactly what's in store at her new job at castle-turned-dinner-theater Tudor Times. Some extra cash, wearing a fancy-pants dress, and plenty of time to secretly drool over the ever-so-tasty--and completely unavailable--Grayson Chandler. Except that it's not quite what she imagined.

For one, the costume Jules has to wear is awful. Then there's the dead body she finds that just kind of...well, disappears. Oh, and there's the small issue of Jules and her episodes of what her best friend calls "Psychic Tourette's Syndrome"--spontaneous and uncontrollable outbursts of seemingly absurd prophecies.

The only bright side? This whole dead body thing seems to have gotten Grayson's attention. Except that the more Jules investigates, the more she discovers that Grayson's interest might not be as courtly as she thought. In fact, it's starting to look suspicious...

This book was fantastic based on what I was able to read! I did have to stop reading due to inappropriate content for my age group.

My favorite character is Jules' grandmother because she is a humorous character. She rides around in a golf cart and points out things in an embarrassing way. I love how awesome and funny she is. She kind of takes away all the tension from bad moments.

My favorite part is when Jules' grandmother gives her "hot-lips" also known as a taser. It gives comedic relief to a very tense moment.

I recommend this book to anyone that likes mysterious murders, hidden passageways and eccentric jobs with a hint of romance.

I give this book 5 out of 5 stars and recommend it for ages 15 and up.

K.C. HELD was born and raised in California with stopovers in Honduras, Mexico, and France. Married to her high school sweetheart, and mom to two avid bookworms, she holds an MFA in costume design and is an accomplished seamstress with a background in opera, theater, film, and television. Although she once spent a summer working in a castle, there were no dead bodies involved. 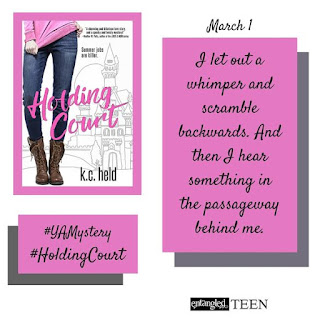